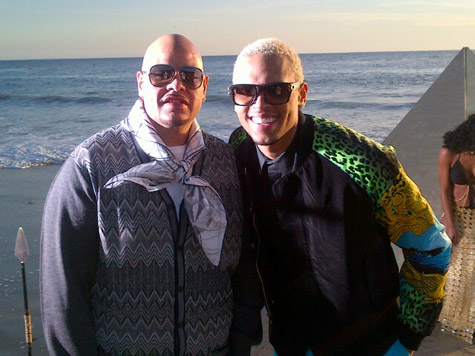 Fat Joe and Chris Brown are the newest artist to collaborate. The musicians recently filmed an Egyptian themed video for their new song Another Round. In the video we’ll get to see Chris wearing the same Versace for H&M velvet jacket that Kanye West, Diggy Simmons, and Swizz Beatz have been seeing. Apparently, that’s this jacket is the hot thing for this season! We also get to see Fat Joe’s new slim body! Look inside to see how the collaboration came about!

Fat Joe told Rap Up how the collaboration came up:

Iâ€™ve known him for years and we toured together in Africa and he was like, â€˜We gotta do something.â€™Â  Iâ€™m like, â€˜You are the hottest ni**a in the game right now; why wouldnâ€™t I want to do something with you?â€™. He always told me that for years but at the time, he was like 15, 16 and just so young. I was like, â€˜Yo, it wouldnâ€™t even be right.â€™Â  But now heâ€™s a grown ass man, so it makes sense.â€

Are you excited to hear the new material?