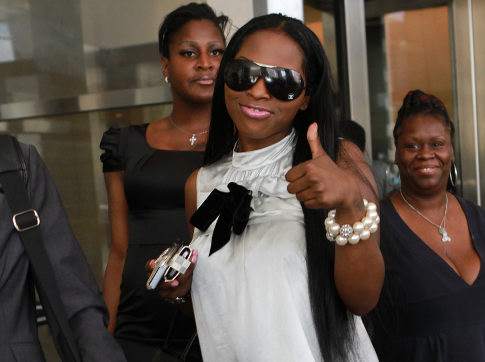 As reported earlier this week, Foxy Brown had to go to court for mooning her neighbor during an argument last summer. Well, Foxy Brown got to walk out of court with her pride because the judge dismissed the case because her accuser declined to testify. Along with her pride, Foxy’s trying to make her way to some money too. Her attorney, Salvatore Strazzullo told the New York Post that he’s planning to sue the city of New York for $100 million.

He bad mouthed the city of New York big time saying that the whole case was a waste of tax payer’s money when there’s school budgets being cut. The city of New York aren’t the only one’s he’s going after either. Strazzullo also said that he’s going to file a claim against the assistant district attorney’s office for “malicious” treatment of Foxy Brown. One legal expert thinks that Foxy’s attorney’s case against the assistant district attorney’s office is going to get dismissed because they have an “absolute immunity” from being prosecuted. Well the say that any news is good news and I guess so. What do you think of the whole case? Pure foolishness? Or just another way to stay on the radar?