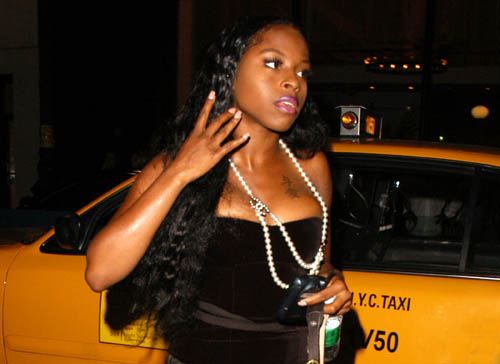 “I doubt she’ll return, ‘Diva’ is definitely not on the menu,” said the patron of a Brooklyn restaurant to the NY Post. It seems Foxy Brown got it in with the owners of Velvet Peach Cafe after a chef took a photo of her without her permission. Reports have it that she was fine until that point. Once that pic was taken, she “threatened litigation if the photo were publicly used,” and then stormed out of the restaurant. A friend of the rapper said, â€œIt was an argument. Sheâ€™s working on herself and everything else in her life. Sheâ€™s working to rebuild her career, and at the end of the day, sheâ€™ll have something great.â€

Foxy Brown is supposed to be dropping a new Lil’ Kim diss and video and promoting in a BK nightclub soon.

Hmmm, a recovering rapper gets mad when a fan snaps a photo…I don’t know how great that sounds if your trying to re-market yourself…Come on Inga! We love you, gotta pull it together!