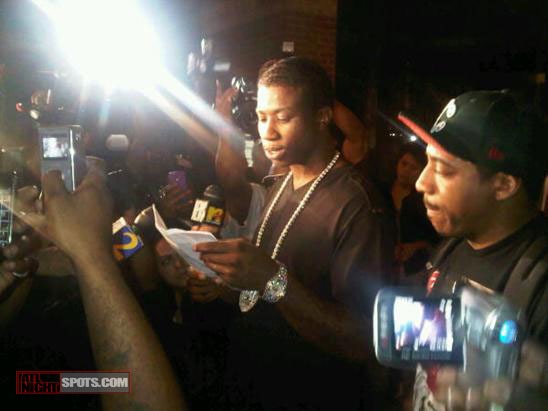 Gucci was released around 12:30 last night! Burr!!!!Â Â A small crowd of people gathered to get a glimpse of Gucci and to hear this these words come from Gucci’s mouth:

“I have made some mistakes in my life that have hurt a lot of people who care about me. I have worked very hard to get past them, but those mistakes have brought me to where I am today, and they will not be repeated. These past six months have been a difficult time, but fortunately I have learned a great deal from my experience. I was able to do a great deal of soul searching; I am coming out with a new attitude towards life.”

I am happy that Gucci has been reformed again (at least for now).

“I was forced to miss what should have been one of the proudest moments in my life. This is something that I will make sure never happens again. My time in jail was trying, but I grew from it and am now a stronger and better person. I want to continue on a positive track and truly focus on being a role model to my fans and my community.”Â  Gucci remember that you can always do community service with my mentor group.

The rapper said he has launched a new label, 1017 Brick Squad Records in affiliation with Asylum/Warner Brothers Records. Â HeÂ informed the crowd of supportersÂ that his new album, The Appeal, is scheduled for a summer release and that he would be going on a nationwide tour starting in July to promote it. Gucci don’t make this a trend 🙂 – Courtney L.