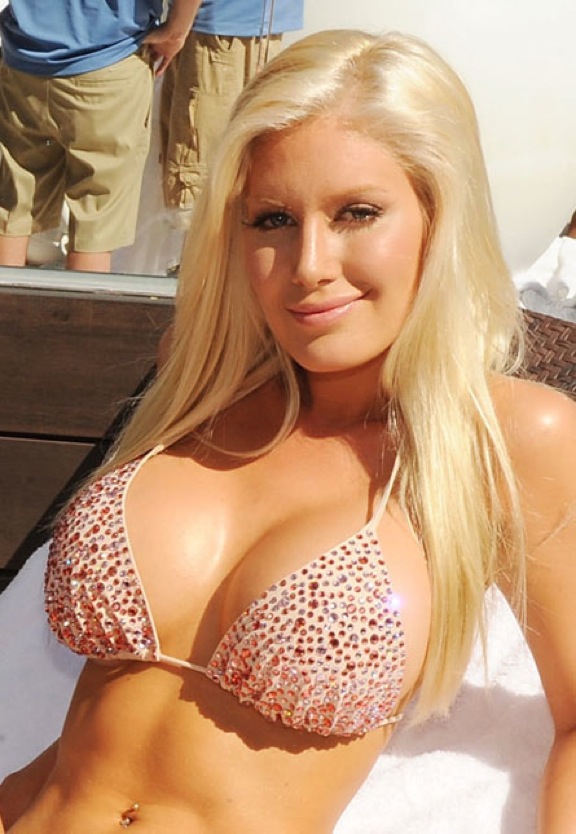 Heidi Montag let her little fake ladies out for the first time this weekend sense she went ham with all that plastic surgery. Heidi was pictured in Las Vegas were she promoted the new LIQUID Pool and Lounge at Aria Resort & Casino.

Montag has admitted to going under the knife to have 10 plastic surgery procedures performed in one day, however she now reveals that wasn’t all she had done. WOW

During a Monday morning appearance on Ryan Seacrest’s radio show “On Air,” the 23-year-old reality star said that in addition to famously getting a mini brow lift, Botox, nose job, fat injections in her cheeks and lips, a chin reduction, liposuction to her neck, her ears pinned back, buttocks augmentation, neck liposuction her waist and thighs and a breast augmentation revision, she also “had my back scooped.”

When asked to explain what a “back scoop” procedure entails, Montag replied, “I actually didn’t know.”

“I might be the first one to try it,” she added, according to UsMagazine.com. “It carves out your back a little bit.”

Despite recent rumors of a marital strife with husband Spencer Pratt, Montag clarifies that they are doing well.

“After everything we’ve been through â€“ it’s a lot for any couple to go through â€“ everything’s better now,” she told Ryan Seacrest.

Clearly she didn’t watch this video…

Shot out to Dlisted for the pic’s… What yall think?

Click Here To Read and Lean More About Liposuction