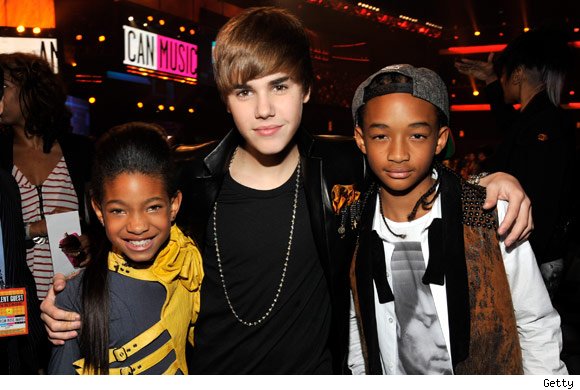 During “little sis” Willow Smith’s “Whip My Hair” performance as his opening act in Manchester, England, Sunday, Bieber, manager Scooter Braun and “swagger coach” Ryan Good made a surprise onstage appearance. The trio burst awkwardly onstage to dance around in neon-colored make up and extensions, while Bieber bangs along on the cowbell. Much to the delight of the crowd, Willow’s older brother Jaden Smith also makes an appearance, and whips his hair alongside his sister!

While the prank went off without a hitch, the same can’t be said for the rest of the world tour.

It seems that the littlest Smith doesn’t take pranks lying down. Once off stage, the diminutive singer said, “They got me, but it is not over; revenge is sweet and is served on a cold dish.”

Check Out The Funny Video Clip:

Watching this makes me miss being a kid again, I know these kids are always having something up their sleeve, it reminds me of myself pulling tricks left and right when I was young..LOL