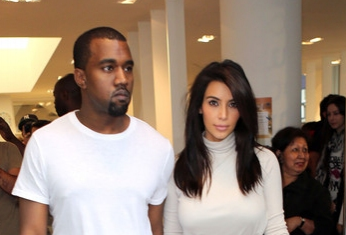 Kanye West’s new ode to Kim Kardashian is raising a few eyebrows. It’s called “Perfect B—-” and the rapper confirms it’s all about his reality TV girlfriend. “Ye” dropped in to a New York City nightclub over the weekend and shared a few new tracks from his laptop with clubgoers. One of them was “Perfect B—-.”

After speculation began to mount about the inspiration for his song subject, the rapper later tweeted “I wrote the song ‘Perfect B—-‘ about Kim.”

MTV cites clubgoers who say the song revolves around Kanye’s search for the perfect woman. Kanye previously dropped Kim’s name in the song “Way Too Cold.”

On that track he admits to falling in love with Kim “’round the same time she fell in love with him” in a not-so-veiled reference to Kardashian’s estranged husband, NBA player Kris Humphries.

“Perfect B—-” will appear on the upcoming G.O.O.D. Music album “Cruel Summer,” due out September 12th. The album also includes the already-released singles “Mercy” and “New God Flow.”
TMZ reports that Kim Kardashian is thrilled to be the inspiration for Kanye West’s new song, “Perfect Bitch”

Kim is reportedly telling friends, “I’m honored. I love it,” adding, “I know he doesn’t mean it in a negative way when he says the word ‘bitch.'”

But Kim feels great about it, saying, “The song talks about how he was with so many other girls but could never find the right one until he met me.”Â Kim is also real pleased about the way Kanye describes her body in the song.