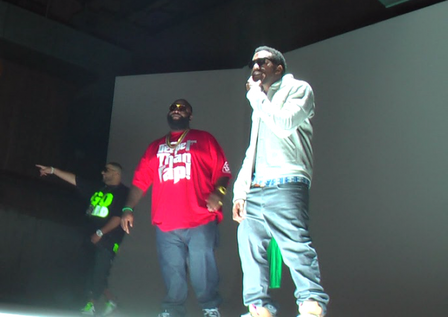 Miami emcee Rick Ross is opening up about his time in the studio with fellow rap star Kanye West. Ross visited ‘Ye in Hawaii earlier this year, and says the experience was educational for both emcees. He tells MTV News, quote,

“We both were having breakfast one morning and we were talking, we both were telling each other just recording secrets, things that artists don’t usually share with each other.”

Ross says he was particularly captivated by Kanye’s instructions on how to hear sounds in color. He adds, quote,

“I was mesmerized, but I don’t wanna go too deep into it.”

While in Hawaii, Rick Ross and Kanye West created a track called “Live Fast and Die Young.” Ross says he’s eager for the song to arrive, noting that it will sound great in the clubs.
He remarks, quote, “It makes you feel like if you had that one record the rest of your life to play, that’s it right here.” “Live Fast and Die Young” will be included on Ross’ upcoming album, “Teflon Don,” which is expected in stores on July 6th.