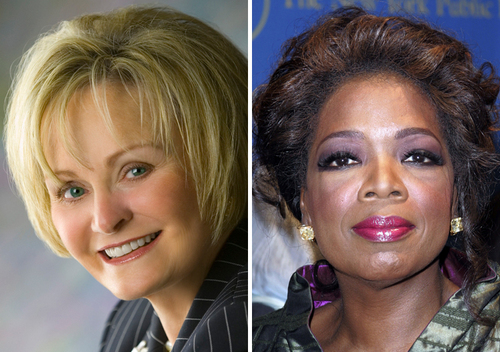 In the explosive new Oprah biography by Kitty Kelley, the talk show queen’s cousin Katharine Carr tells all about the lies Oprah has spread in the name of television. I really dont know how I feel about this she is quoted in the book as saying:

“Now, you have to understand that I love Oprah, and I love all the good work she does for others, but I do not understand the lies that she tells. She’s been doing it for years now.

Where Oprah got that nonsense about growing up in filth and roaches, I have no idea. (Oprah’s grandmother) kept a spotless houseâ€¦It was a wooden, six-room house with a large living room that had a fireplace and rocking chair.

Oh, I’ve talked to her about this over the years. I’ve confronted her and asked ‘Why do you tell such lies?’ Oprah told me, ‘That’s what people want to hear. The truth is boring, Aunt Katharine. People don’t want to be bored. They want stories with drama.

That story [of sexual abuse] helped launch Oprah and make her what she is todayâ€¦I don’t hold with telling lies, but in this case I forgive Oprah because she has done so much for other people. Maybe this was the only way for a poor child to succeed and become rich. Now she does her good works to make her amends.

Oprah does not love her mother at allâ€¦She gives her a great deal financially but she does not give her the respect and affection a daughter should, and that bothers me. Vernita did the best she could with Oprah, who was a willful, runaway child.”