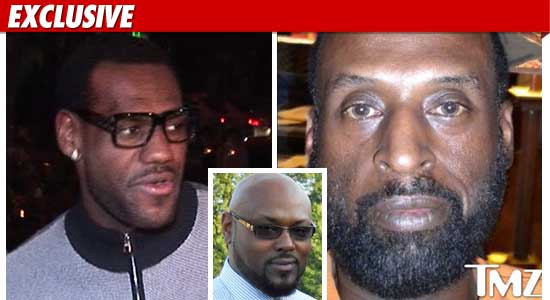 The man claiming to be LeBron James’ biological father is getting some serious flack over his story — and it’s coming from his own brother. But from the looks of the picture, that MIGHT be Bron’s dad…

TMZ spoke with Leicester Bryce Stovell’s younger brother — “Junior” Stovell (pictured center) — who tells us, “something’s a little fishy” about Leicester’s allegations. You have to watch the video below. He is a Princeton Grad and lawyer…but wants millions from Lebron and his mother. Hmmm.

As we first reported, Leicester filed a lawsuit against LeBron and his mother Gloria James, claiming they tampered with evidence that could prove he’s the daddy.

“Junior” tells us his family has been “joking” about the situation ever since Leicester suggested he was the dad a few years ago — but notes that Leicester â€œbelieves in his own mindâ€ that it’s legit.

As for why “Junior” thinks the story is fishy … he tells us, “Leicester never mentioned anything about LeBron being his son until LeBron became the king.”

So where is Lebron’s REAL dad exactly? Sounds like some Maury ish to me…