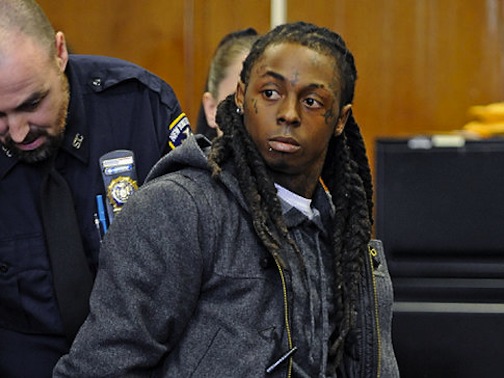 A guard at Rikers Island is being disciplined for hanging out with rap superstar Lil Wayne. The “New York Daily News” is reporting that Correction Department Captain Raphael Collazzo has been suspended ten days without pay for making an unexpected, 45-minute visit to Weezy’s cell in isolation. Collazzo’s rendezvous with the emcee was reportedly captured by a security camera. An insider tells the “Daily News” that it isn’t clear why he was visiting Lil Wayne, adding that Collazzo’s explanation, quote, “did not suffice to explain the time he spent.” Patrick Ferraiuolo — president of the union for correction captains — says Collazzo claims he hasn’t had “any dealings” with Lil Wayne. Raphael Collazzo isn’t the first employee at Rikers Island to get in trouble for interacting with Lil Wayne. Amelia Negron was fired back in April for visiting the area housing the emcee’s cell. Captain LaTanya Brown has also been accused of giving Lil Wayne preferential treatment.
Lil Wayne is serving a one-year sentence for weapons charges. He was placed in what jail officials call punitive segregation earlier this month for being in possession of an MP3 charger and a pair of headphones back in May. He is expected to be released from Rikers Island sometime early next month.