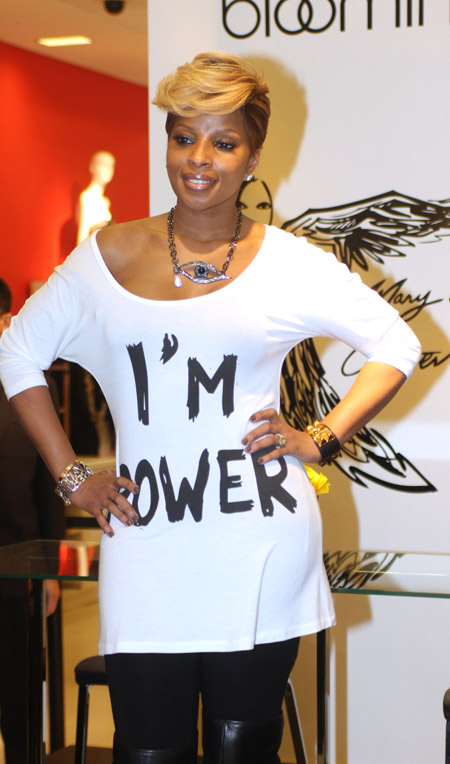 Mary J. Blige was spotted at the debut for the limited-edition FFAWN + Catherine Malandrino capsule collection of T-shirts at Bloomingdaleâ€™s flagship store in NYC Bossip is reporting. We have to give it to MJB, sheâ€™s been on point lately.

In other news Mary isn’t afraid to ask for a little help. The vocalist recent spoke with “Walmart Soundcheck” about her turn as “Tanya” in Tyler Perry’s “I Can Do Bad All By Myself” and humbly admits to needing an acting coach for the role. Blige says, quote, “It was a lot of work. I had to get an acting coach because I’m not [an actor]. That’s not my first profession. It was a blessing. It was something I know I need to do more of.” She says the film brought her close to actress Taraji P. Henson, who is now one of her good friends. “The Queen of Hip-Hop Soul” says looking back, making the film was “the best” experience in acting she could have had. She calls director Perry “amazing” and looks forward to more acting gigs in the future.
Fans can get a backstage look into Blige’s work atÂ Soundcheck.walmart.com, where a Soundcheck of singer Toni Braxton is also posted.