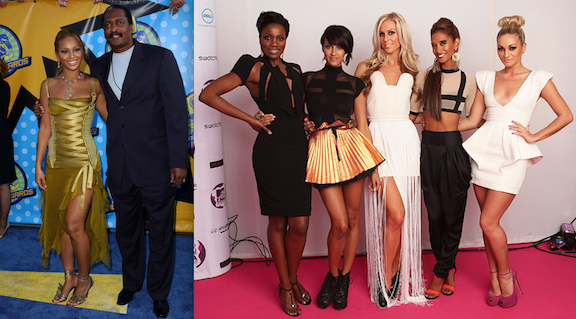 Beyonce’s father is wasting no time trying to find his new big act after being dropped by his daughter. Mathew Knowlesâ€˜ Music World Entertainment and Music World Music recently announced that the company is partnering with MTV for a new reality series called, â€œBreaking From Above,â€ which features a hot all-girl group, â€œFrom Aboveâ€ (pictured) â€” is a group of girls that will do anything to make it big the girls are from the, UK and from the looks of what he’s putting them threw are on the ride of their lives.
EURweb is reporting Ashley, Daisy, Seyi, Chelsey and Monique are all in their early 20s and have had various roles in the entertainment business, as singer/songwriter to featured dancer on the Kanye West tour, to lead vocalist in a UK girl band to dancer on a UK dance reality show.
The five girls will be hopping the Pond to Houston, Texas for a much anticipated date with the Music World Entertainment founder and president â€” a man who knows a thing or two about turning girl groups into gold.
Heâ€™ll put the group through his trademark Star Powerâ„¢ Boot Camp of hardcore physical, vocal, media and choreography training to emphasize the philosophy that made global superstars of his protÃ©gÃ©s Destinyâ€™s Child: work, work and more hard work.
But thereâ€™s a twist â€“ when the girls get to Houston, they quickly learn that there are two new girls, Jasmine and Brandy, living in the house with them and they are now ALL in competition for a spot in â€œFrom Above.â€
The pressure mounts over the course of their artist development camp, as the girls are put through their paces by famed choreographers Danielle Polanco and Frank Gaston, as well as musical director Tom McKinney and fitness instructor Rozelle Jones of Camp Gladiator. And as Knowles remains very hands-on, especially when it comes to team-building and trust exercises, the studio beckons as the group start to develop their â€œsound.â€
â€™Breaking From Aboveâ€™ premieres in 160 countries the week of November 13thâ€”not aired in the U.S.

Here’s there new song Pink Stiletto’s tell me if you feeling it?