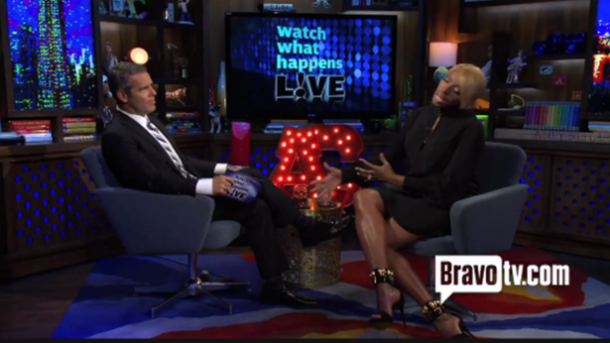 My girl NeNe Leakes had a very special 30 minute chat session with Andy Cohen on ‘Watch What Happens Live’. She is candid about her thoughts on her fellow cast mates including her friendship status with Cynthia Bailey.

Check it out below.
NeNe Leakes kept it 100 as she sat down with the homie Andy Cohen to chat about the Housewives and the drama ridden RHOA reunion show. She speaks briefly about the girl fight between Porsha and Kenya during filming.

NeNe spoke about her issues with Marlo Hampton and how Kenya instagated the issues that ruined their friendship. She says that she needed a BREAK from Marlo and Kenya swooped right in and put an end to their friendship.

NeNe also alludes to her issues with her home girl Cynthia Bailey. She suggest that her friend tries to come off innocent but she is a flakey friend who don’t keep it 100. She even suggest that Cynthia’s story line is boring.

I think that Cynthia was my friend. That’s what I thought…. but I feel that  Cynthia will blow whichever way the wind blows.

When you have a friend and they do something wrong or something you don’t  like, you don’t align yourself with the enemy.

She goes on to say that Kenya is perfect for the show,

Honestly, you can ask anybody that knows me… I personally do not Like Kenya.  But I am all for the good of the show. I have been here since day one and I  think she is good for the show.

I will go on record. She is drama. She doesn’t take her medication before  shooting. So I think she is great for the show.

If I were the creator of the show, I would have a ding dong like Kenya.  I  think she’s great.