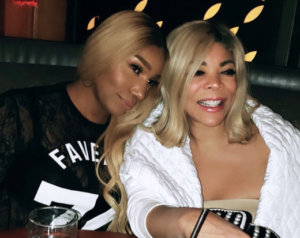 According to The Jasmine Brand, Williams hinted that Leakes was leaving RHOA and referenced a text she received from her Tuesday morning. She then said there was something else going on that the audience had not seen that was NOT related to Leakes’ husband’s recent fight with cancer:

“I’ve got to say something but I’m not gonna say a whole lot. I know something about NeNe that will make you all cry, be sad, feel bad for her. She’s carrying the weight of a huge thing on her shoulders.

Williams continued her comments while speaking to her guest actor Jerry O’Connell and encouraging Leakes to share her truth herself:

“Listen… I’m not going to say it, she’s got to say it. But in my opinion NeNe, I didn’t even call you back. You need this platform to explain the other part of your life. Forget hair pieces and arguing with them broads. You’ve got that secret and that secret is gonna melt their hearts. When she shared it with me, I cried with her, Jerry.”

PEOPLE Magazine says her representative told them that “nothing has been confirmed or officially decided for next season.” The rep also said that “it’s been an especially difficult couple of weeks for NeNe, and she was venting to her friend in private correspondence.”

Whatever is going on with NeNe, we certainly wish her well and send positive thoughts her way. We’ll also be sure to keep an eye on this story and update you when we know more information!