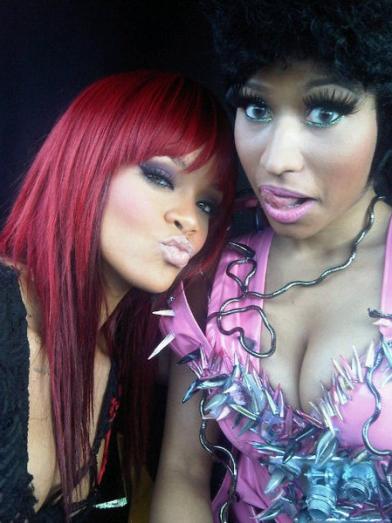 That’s what I’m talking about girl power at its best. It is refreshing to see my girls sticking together and allowing one another to get their shine on egos aside. This is truly how we uplift and have longevity in this business. Always willing to help another. Nicki Minaj tell MTV in an interview that she is pushing the highly anticipated release of the video “Fly” which features Rihanna, for a few more months because Rihanna still has songs on her album she would like to get high volume radio play. So to not overshadow each other, Nicki will release her fun filled video entitled “SuperBass”.

Iâ€™m gonna hold off on the Rihanna video and the Rihanna single for a little bit longer, cause we both kind of dropped at the same time. So she has a lot of [songs] in rotation and I want to let her stuff have a moment and do its thing, dominate radio. [Instead], I wanted to do something a little more fun. The Rihanna video is a freaking epic movie. It will be out, trust me. Look for it around Memorial Day video.

Meanwhile, she is gearing up for the release of her next video, â€œSuper Bassâ€ which she says is her â€œmost fun videoâ€.

â€œIâ€™m taking it back to a few things that Iâ€™ve done, itâ€™s a lot more fun. It will be my most fun video and my most carefree video, lots of eye candy and lots of beefcakes.

So there you have it guys. Make sure you guys especially the ladies, go out and continue to support these ladies music. Nicki Minaj’s Pink Friday and RihRi’s Loud album are still in stores.