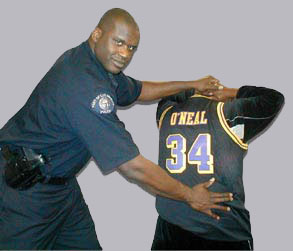 (9/15/2010) NBA Baller Shaquille Oâ€™Neal is in the middle of yet another lawsuit involving his cheating ways. Our home girl Necolebitchie, reportedÂ  heâ€™s being sued by his former IT guy for computer hacking, destroying evidence and planting child pornography on one of his employeeâ€™s computers to frame him. According to the allegations:

* Shaq used his law enforcement contactsÂ  to obtain restricted information about one of his mistresses, Alexis Miller (aka rapper Mary Jane), while he was involved in a legal battle with her. The lawsuit alleges, that Shaq told his IT guy that Mary Jane had obtained a restraining order but he couldnâ€™t remember what he had sent to her via text and email. He then asked the guy to retrieve every email and text message that he had sent to her as well as all of his phone records. After getting the information, they performed a â€œDefense Department type wipe of Shaqâ€™s computerâ€ and then threw the computer in a lake in the back of his home.

â€œMary Janeâ€ eventually filed a lawsuit against Shaq for harassment which was later settled.

Shaq also hacked into the voicemails and phone systems of Vanessa Lopez, a mistress who is currently suing him. Once the former IT guy found out about Shaqâ€™s affair with Lopez, he reached out to her and she told him that she thought Oâ€™Neal was trying to break into her voicemail, deleting messages and changing her passwords. He found evidence that Shaq was doing so and told her about it.

*Shaq became furious when he found out that his â€œIT guyâ€ had ratted him out to Lopez and tried to frame him by enlisting a top computer programmer to plant child pornography on his computer.

This guy has proof that Shaq has cheated on Shaunie with multiple mistresses. He also has an email exchange from Shaq and his agent which proves Shaq tried to frame him.

Wow…that is all I can say. Shaq no comment. Wait why didn’t you sign a confidentiality agreement with your IT guy? Shaq you might be over your head on this one. Â What are your thoughts? – Another post by Courtney L.