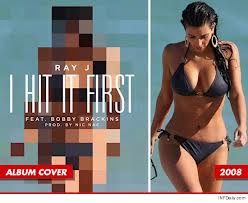 Ray J has released a new single called “I Hit It First.” Some are calling it a Kimye diss.  In the song, Ray J says, “She might move on to rappers and ball players But we all know I hit it first.” Let’s be honest if it was not for Ray J Kim’s career would have been insignificant. I think it is a really good though, but you guys can tell me what you think.