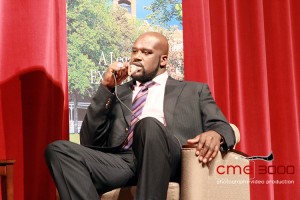 Shaquille O’ Neal the four-time NBA champion, three-time NBA Finals MVP, 15 time All Star, All-American at Louisiana State University, musical star, renaissance man and Nineteen years in the NBAâ€™s league makes a very impressive resume for â€œThe Big Guyâ€ as he is often referred to by â€œUncle Jeromeâ€. Â But there is a lot more to Shaquille Oâ€™Neal than basketball.

It seems like Gladys night wasnâ€™t the only one on that midnight train to Georgia from the Soul Train awards. Spotted at the Gold Room Thursday night was a Very Tall Confident Shaquille Oâ€™Neal who was in town for a few reasons. #1 Visiting the set of TNT preparing for his new analyst job on TNTâ€™s Inside The NBA, and #2 He was visiting Morehouse College for his one on one live taping of an interview with Kelly Wright from Fox News discussing his new book â€œShaq Uncutâ€.

I was extremely surprised that Shaq began his interview by stating he oweâ€™s his success in his career and as a person to having the Oedipus complex . Though Shaqâ€™s definition was â€œbeing in love with his motherâ€ further explaining that his deep love for her and desire for her to have everything that she could ever dream of has been the motivating force driving him to WIN at whatever opportunity he was presented with; the Wikipedia definition is slightly different and a tad more indepth.Â  The hour went by fast as Shaq answered such questions as â€œWhat makes Shaq tick? By responding â€œfried chicken, macaroni and cheese, sweet potato pie, potato salad, peanut butter and jelly sandwiches and he even gave the recipe for making pancakes when you have no pancake batter.â€ LOL!Â  The part that most impressed me was Shaq contributing the man he is today all to FAMILY! Tough love from his stepdad that he gave much credit to for stepping up to the plate when he was only 3years old and being with his mom (a single mother) being part of her life and playing a huge part in the life of her child as if it were his birth son. Shaq gives him a lot of credit for that because he was correct in that we do not see a large percentage of black males doing this.Â  He gave great advice to Single Moms to hang in there regardless of the circumstances, acknowledging it’s a hard and long road for single parents in today’s economy, and to their kids to never stop dreaming.

Hopefully this one hour interview will not end in Shaq needing to apologize again to NBA player Yao Ming, re-living a previous slap on the wrist he received by simple doing something he was accustomed to seeing every Saturday morning on the cartoons when watching the old karate flicks. (You must see the interview on TNT Network) in order to get this joke that was quite amusing.

Another point that stood out was Shaq paying homage to the Boys & Girls Clubs of America and pointing out how instead of just a babysitting recreation center he was forced to attend while both his parents were at work, he turned life there into his Big Break for the future by using it to maximize his wildest imaginations. While walking to the center he was able to pretend he was rap Legend LL Cool J by wearing his knock off Kangol hat and knock off chains learning to walk this way and talk this way like a real rapper and beat box king he would later grow to be. Talk about a wild imagination. Shaq can proudly say he has donated over 50 million dollars to the Boys and Girls Club on technology equipment to gym equipment and making sure the grounds were adequate for playing ball (as you can read about in his book) hint hint pg 119.

So much to learn about â€œThe Big Guyâ€ by reading this book. Shaqâ€™s desire to have a friendship with the Great Kareem Abdul Jabar whom he was always being compared to. Whoâ€™s concept it was to include the NBA Legends in one of his commercials and I promise this book will win your heart over in case â€˜The Real Shaq hasnâ€™tâ€, Shaq Uncut is definitely the â€œfriend in your headâ€ in my Wendy Williams voice that you always dream of having as a homeboy. This book written by Shaquille Oâ€™Neal with Jackie MacMullan is a must read and available on amazon.com and in all bookstores where books are sold. Thanks Shaq for getting off Gladyâ€™s Midnight Train or what she on your midnight private Plane? Either way we appreciate you doing the question and answer with the kids on stage and we know they all wish they had a book and a basketball for you to sign. You are truly a Class ACT regardless of what Kobe Bryant has to say about you in the locker room. Shaquille O’Neal You are alright in Freddy-o.comâ€™s book anyday.