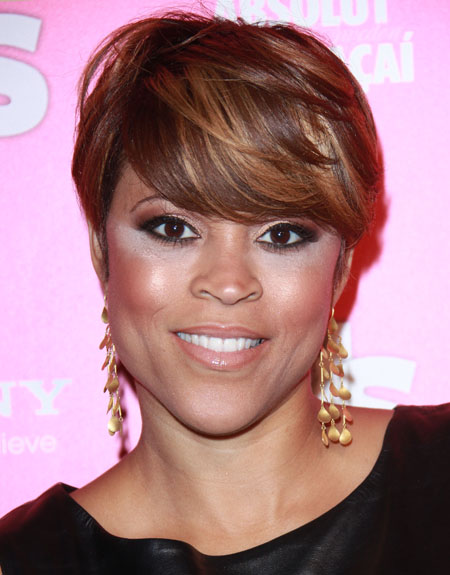 Recently Shaunie O’neal, had an in depth conversation with the “Breakfast Club” at Power 105.1 to discuss her highly rated hit reality show “BasketBall Wives”. Shaunie directs, executive produces, and stars in the drama crazed show that has all her fans on the edge of their seats anticipating the return of Season 3.

She goes on to discuss the rumors of Royce being kicked off the show, Whether her long time friend Evelyn is erally quitting the show and her thoughts on her ex-husband Shaq and newly engaged fiance reality jump-off Hoopz.

Check out the Interview:

On Whether she would be kicking Royce off of the show
That was all rumors. She canâ€™t talk about [Dwight Howard], that is very true but Royce has established her own fan base. There are some people out there that love Royce. Even when that rumor came out people were like â€œNo, donâ€™t get rid of Royce!â€ I did think Royce was like the wild card at first and she kind of was. We opened up season 1 and she was doing the booty dance and after she did that it was when the world saw it and had stuff to say.

On Evelyn and Tamiâ€™s fight
When Iâ€™m in a scene, Iâ€™m not anywhere in the producing seat. I found out that night at the dinner table. It was just like I get Evelynâ€™s sideâ€¦.I do. She and I have talked about it and sheâ€™s like â€œwell, remember this person was there, this person is normally not there, remember when this was said, what if this happenedâ€¦â€ Those things, those pieces she is right. It was a couple things that were fishy about the evening but no one told me to do or say anything.

Why did she even admit it?
I donâ€™t know and thatâ€™s where we are now. Evelyn is my friend so we talk and some friendship stuff. I said, â€œEv you know, you didnâ€™t have to say it but she felt for whatever reason from some where that she did need to talk about it. Ev is my friend, friend. Thatâ€™s the one that Iâ€™ve been closes with from jump from when we were in Miami. Iâ€™ve known her the longest and I feel really bad because here we are now and sheâ€™s getting so much back lash on Twitter and FaceBook for something that was ten years ago.

Let me say this, It took about 10 people to pull Evelyn away. It was so many people on Evelyn. After Tami had got her little bit out, she kind of let it go but Evelyn, it took about 10 minutes and 12 people to hold her back.

Is Evelyn leaving the show?
Evelyn hasnâ€™t told me that. We were talking and Iâ€™m being as supportive as I can as a friend and holding her down. No, sheâ€™s hasnâ€™t told me sheâ€™s leaving and everybody has signed up for season 3.

Are you going to have anything to do with this alleged spin off show that Evelyn and Ocho Cinco are supposed to be getting?
Thatâ€™s an alleged thing but that depends on the legal side. If it the same network.. that whole thing is how if I have any parts.

How do you feel about Hoopz being engaged to Shaq? Are they really engaged?
I really donâ€™t know. I have no idea. We donâ€™t talk about that