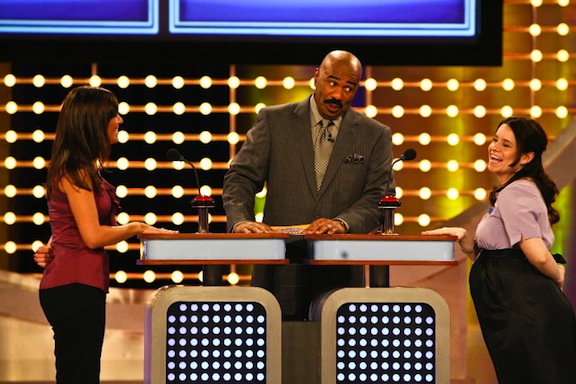 Atlanta comic Steve Harvey, who hosts his nationally syndicated radio show out of Buckhead, spent a few weeks last year taping 180-plus episodes of â€œFamily Feudâ€ out of Orlando for his first season as host. But with the syndicated game show seeing improved ratings under the helm of Harvey, he used his influence to convince the producers to move the show to Atlanta. Harvey replaced actor John Oâ€™Hurley as host and has been given the freedom to pepper in his own brand of physical and verbal humor into the game.

To all my fellow ATLiens, it’s time to find out how to become an audience member as well as contestant on this classic game show, for which we know without a doubt is gonna put the A on the map once again. Harvey, heard locally no Majic 107.5/97.5, is also promoting his own production operation called Green Screen Studios, where â€œFamily Feudâ€ will be produced.

Harvey expands the spotlight on Atlanta as a hub for Hollywood talent and work with the creation of his Green Screen Studio. With over two decades of experience entertaining audiences worldwide on stage, television and movie screens, radio and in books as a comedian, writer, producer and more, Steve Harvey brings more Hollywood-quality offerings home to the South, creating a big, versatile space thatâ€™s already been the site for numerous corporate and network video and photo work
Says Harvey, â€œIt only feels natural to provide a production need in a growing entertainment market like Atlanta, and offer a well-sized alternative to the smaller green screen rooms Iâ€™ve seen.â€ Providing a full range of amenities to inspire and produce the best photos, video or web content, Steve Harveyâ€™s Green Screen Studio boasts flexibility and the space to shoot almost anything without overwhelming, serving utmost convenience and manageability in 1405 square feet of working space. The 3-sided cyc wall green screen area measures 665 square feet, with an additional open area of 740 square feet, while the rest of the stage area includes a lighting grid with power, sound room and control room. Steve Harveyâ€™s Green Screen Studio also features numerous comforts with a gym, kitchen, video security, ample office space, ISDN line availability, free Wi-Fi/DSL internet, free local and long distance calling, a TriCaster unit for live web streaming, and more. From photo shoots to videos, Steve Harvey has hosted a variety of projects at his Green Screen Studio including Family Feud, BET, State Farm, Premiere Radio Networks, and Gospel Music Channel. A tour or booking of Steve Harveyâ€™s Green Screen Studio in Atlanta can be arranged by contacting Rafael Ortiz-Guzman at 404-995-1609 or Leonard McGee at 404-995-1607.