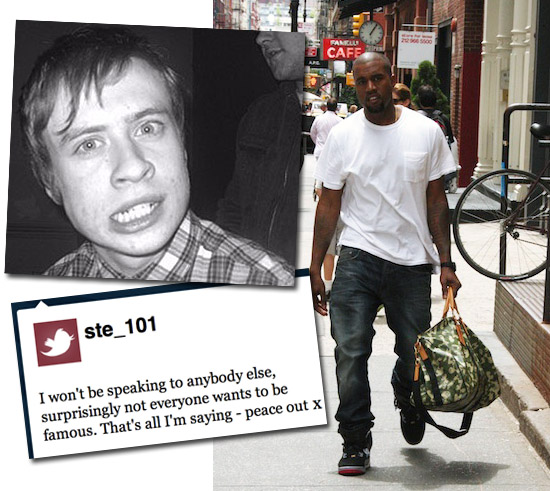 The ever quoteable Kanye West has been on Twitter for one week and my life has been made better by his infinite wisdom in 140 characters or less. If you aren’t following him, here’s a recap of some of the trinkets of wisdom you’ve missed. I know you are probably wondering who is the one person that he’s following. The lucky young mans name is Steven Holmes and it seems as though he’s a little ungrateful, I wish West would follow me….Â Â Here all the info on him and some of the other stuff that Kanye has been tweeting on…

Steven Holmes, a 19 year old boy from Coventry, England, suddenly found himself the target of a Twitter-storm when West singled him out as the only person he’d choose to follow.

“I just commented on something on Kanye West’s account and next thing I know he’s following me,” Holmes told his hometown paper, the Coventry Telegraph.

After he realized he’d been singled out, an elated Holmes thanked West on his account, Tweeting, “Holy s— bro thx for following!” West, who’s been making headlines for his vastly entertaining tweets, responded in kind, “You are the chosen one dun dun dun dun.”Â But the honeymoon didn’t last long, as Holmes found it difficult dealing with the barrage of followers and journalists hounding his Twitter account.

“About 20 seconds later I had 20 messages from people I didn’t even know and my phone wouldn’t stop bleeping,” Holmes told the newspaper.

The time off seems to have done West some good; his new single “Power” has received positive reviews and his spontaneous visits to the headquarters of Facebook and Rolling Stone were all well-received.

But while West basks in his renewed limelight, his “chosen one” has decided that fame’s not for him. Following the influx of followers post-Kanye and pestering from the press, Holmes decided to take a break from Twitter until his fifteen minutes simply pass him by.

“This has been completely surreal and I really have no desire for this attention i’m just a normal person,” Holmes tweeted Monday. “I won’t be speaking to [any more press], surprisingly not everyone wants to be famous. That’s all I’m saying – peace out x.”

Twitter has gotten exponentially better with Kanye. This is the man that brought us “George Bush doesn’t care about Black people” and “I don’t need you r p**sy, b**ch I’m on my own d**k.”

Is there anyone more quoteable than Mr. West? Â Or am I just a stan?