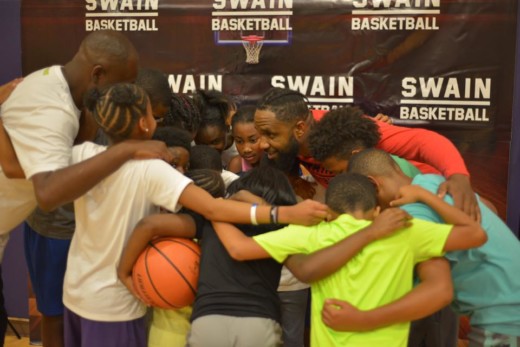 The Swain Basketball Academy is now accepting registrations to develop your student athletes Individual development and training through group training, team training, basketball camps and shooting gun workouts. They are committed to small one on one development as well. What makes the Swain Basketball Academy stand out as a staple Atlanta training facility? I would have to say it’s the passion and drive of it’s founder Robert Swain.

In case you are not familiar with Robert Swain’s principles. Players are welcome to all different skill levels who have a desire to learn, train, and compete in basketball. Courtcred.com describes Robert Swain by saying the following:

A three-time National AAU champ with the Atlanta Celtics, Swain averaged 29 points, eight rebounds and five assists during his senior year at Tri-Cities High School. Regarded as a Top 50 recruit, Swain committed to UConn and rounded out a recruiting class that included McDonald’s All-Americans Taliek Brown and Scott Hazelton, Caron Butler and Johnnie Selvie. The following year with the additions of Ben Gordon and Emeka Okafor, UConn won the Big East Championship and made it to the Elite Eight. However, minutes were scarce for Swain in Storrs and he transferred to the College of Charleston. He played two season for the Cougars before graduating and then finally playing professionally in Europe.

During his time back home from overseas Swain would hold free training sessions for the kids in the community. These sessions would fill up with about 70 to 80 kids. But it wasn’t until Swain hit rock bottom that he realized his ability to motivate and help others get better as a real gift from above. Swain got himself into some legal issues and had to serve two years in the federal penitentary. Having felt like he lost it all, it was basketball and his relationships developed through the game that kept him sane. His former head coach Jim Calhoun was the recipient of many collect calls and answered them every time. To keep himself occupied, Swain began to train prisoners and came up with the business plan for “Swain Basketball Academy” during a stint in solitary confinement. The company’s current slogan, “Own Your Moment,” came from behind those walls.

Today, The Swain Basketball Academy offers two different locations where your child can be properly developed.