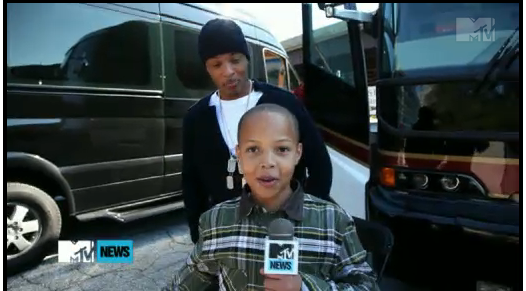 We told yall a while ago that my homie Tip’s son Domani Â had been following in his dad’s footsteps. He came out rappin with the Omg girls on the Scream Tour in Atlanta last week. This week he’s on Mtv with his dad coolin and spittin hot bars!

Domani kicks it with Mtv and his dad and sets the record straight about his rap name. He says that someone on youtube said his name was G money but its D money. He jokes around with the camera and his dad about the pronunication of his name then he starts spitten bars. Besides looks when he opens his mouth to rap you can tell Tip is his dad.
Here’s a couple lines :

Lil Wayne Iâ€™m illy and I got that milli

Step up in the building,You see money flying everywhere,

Wall full of Pradaâ€™s,Â So you know Iâ€™m buying every pair

What ya’ll think about his freestyle, can’t you tell he got some of his daddy’s swag? Here’s The Video!!!!