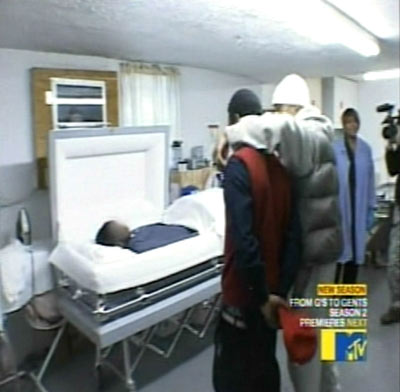 People are always trying to make a dime in what ever way they can. MTV is under fire for including a footage of a corpse in a February 2009 episode of T.I.’s reality show “T.I.’s Road to Redemption”. Relatives of the dead man, Joseph Williams, complained that it was a disrespectful move done without their consent.

In the first episode called “You Are Responsible for Your Own Actions”, T.I. took the viewers to The Haugabrooks Funeral Home and showed a young man’s corpse whose face was blurred. The mortician said the the man was a hustler and that his parents did not know how he really died.

Williams’ father Joseph Williams Sr. and other family members claimed that the vision has caused mental distress. Moreover, they accused the funeral home’s employee of giving a false fact that they “didn’t know what happened to their son.”

In the lawsuit filed on Wednesday, February 9 in Fulton County State Court, they sued MTV, the rapper and the funeral home for carelessly mishandling the body “for financial gain and publicity”. They seek an unspecified amount of damages for the mental anguish.

Neither T.I. who is prison until September nor his rep was immediately available for comment.