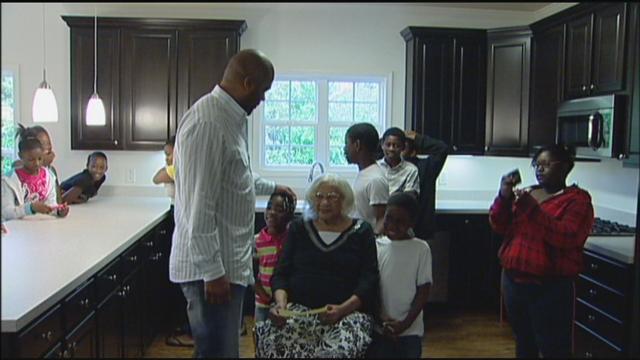 Tyler Perry made good on a Christmas promise today when he handed the keys of a new four-bedroom house to an 88-year-old woman who lost her rural Georgia home to a fire.

Rosa Lee Ransby and her seven grand- and great-grandchildren lost their home a week before Christmas. Perry saw the story on a local TV newscast and not only decided to rebuild the house, but also fill it with furniture.

More than 20 family members attended a ceremony in rural Coweta County on Friday.

Perry says he wanted to do something for Ransby when he found out the family didnâ€™t have any way to rebuild. He says the main thing was getting her enough space for the children and for them to have room to play. Tyler also went on to say this good deed he did for the very humble and gracious family was inspired by his late mother who passed away December 2008.

“I was just thinking about my mother around Christmas time and what i could do for her,” he said. “There’s so many folks who need help out there, I hope we can pay it forward. We all have a responsibility to help each other.”

Be sure to go out and support Mr. Perry it’s because of his loyal fans that he is able to sew those same seeds back into the community to help and inspire. Tyler’s latest film to be released is “Madea’s Big Happy Family” is set to hit theaters nationwide April 22, 2011.