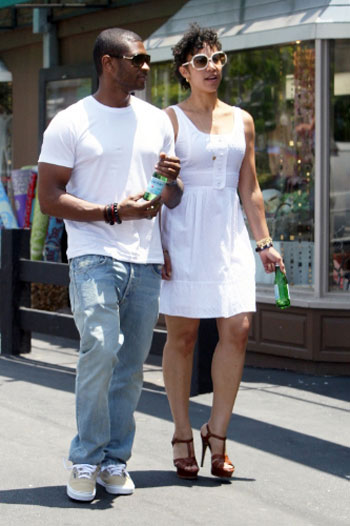 So now Usher’s new leading lady in his life Grace Miguel, is coming in and taking over his empire, but not in a way we would be too proud of. Reports of been issued stating that Usher’s girlfriend/Stylist/ Co-Manager is firing his enitre staff and bringing in her own team of professionals, “I guess” to better facilitate the over flow of his brand. “I thought he was in good hands already!” clearly the team she is firing is the sole reason why Usher has banked in on Justin Beiber.

Usher who right now seems as spineless has it gets, has also agreed to get rid of his agent of 16 years Mark Cheatham.

Cheatham was tight-lipped when we contacted him. “I don’t know anything about it. I’ve been with Usher for a long time,” he told us. “I’ve been on great terms with Usher. Talk to my publicist.”

A CAA publicist never got back to us, but Usher is no longer listed on their client list.

A source close to Cheatham tells us, “Mark is really upset. He’s been with him from the beginning. He thinks Usher will come back, He’s just waiting.”

Wow! It’s funny how Usher was complaining how his ex-wife Tameka Raymond was too controlling in their marriage, yet in the same breath he gets himself beak into a similar situation if not worse. But we are going to stay out that mess.