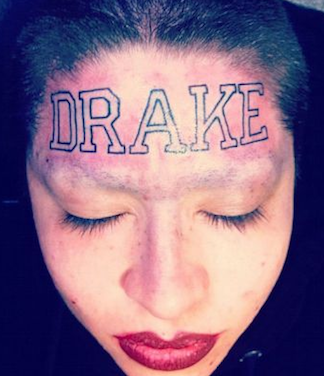 A woman in southern California is removing any doubt as to who her favorite rapper is.

A photo has surfaced online which shows an unidentified woman with Drake’s name tattooed in bold letters across her forehead.

Campbell tells “Vice” magazine that the woman was “really psyched” about the tattoo when she came into his shop, noting that she even had the font she wanted picked out on her phone.

Campbell saysÂ the woman’s enthusiasm for the tattoo “changed pretty drastically” once all five letters were spread across her forehead.

While Campbell was happy to provide the woman with a little ink, he adds that tattoos like that just reinforce his opinion that the world is heading in the wrong direction.

The homie Necolebitchie post the interview and what the LA Tattoo artist who inked the ladyâ€™s forehead up had to say. In the interview he revealed that the lady was probably â€˜on oneâ€™ when she came into the shop as well as his thoughts on her decision to get the tattoo:

On his first reaction when the lady said she wanted the tattoo done:

The funny thing is, I didnâ€™t know who Drake was, I figured it was her hood or some sh*t, not some goofnugget R&B dude. 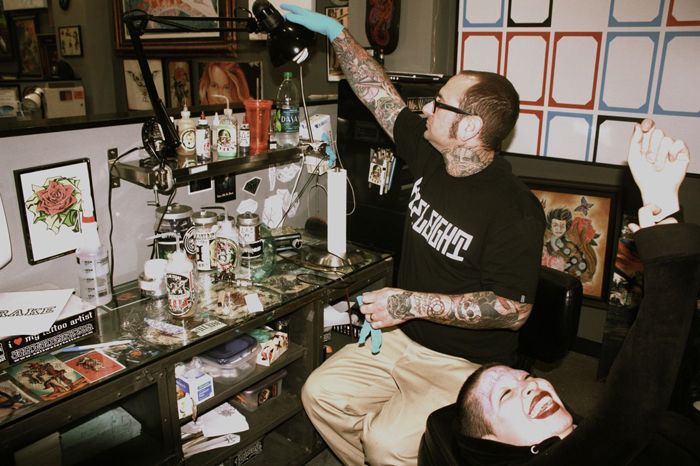 On if she talked about what it meant to her
Yeah, she was really psyched about it. She had the sh*tty font all picked out on her iPhone ready to go and was pretty adamant about putting it on her forehead. She didnâ€™t say a word about what it meant to her, some of the guys at the shop asked her, and she just kinda giggled at them. When I printed up the first image of the lettering, she wanted me to go bigger, so that it went pretty much from each side of her hairline to the other. I thought she shaved her eyebrows for the procedure, so when I put the stencil on the first time, it was right over her (missing) eyebrows, but she had me enlarge it a bit and push it up towards the hairline. But yeah, she acted as if she had planned it out for a while; though Iâ€™m not really sure how much extended coherent thought could actually go into getting such a stupid tattoo on your forehead.

On if he feels bad about the tattoo
I guess I feel bad that this dumbass got the name of the softest motherf-cker in hip-hop tattooed on her forehead. But what makes that any less valid of a tattoo to her? I lost a little sleep over it that first night, wondering if I wanted to be known as the asshole who tattooed â€œDrakeâ€ on some crackheadâ€™s forehead. None of the face tattoos I had done prior to this got any publicity, so I was a little surprised that this one took off like it did. 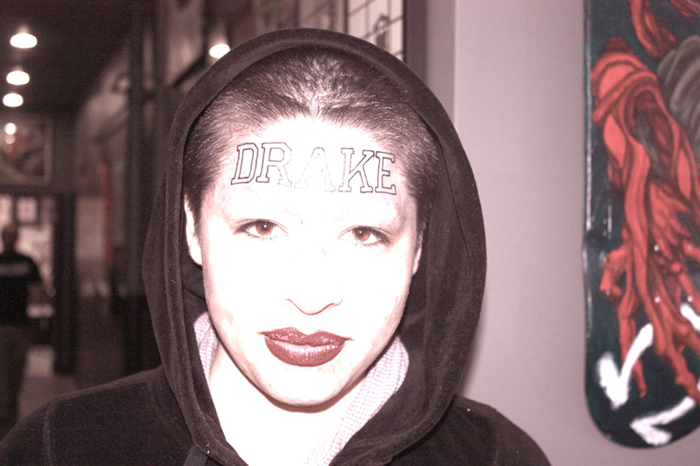 On if he thought it would get this much exposure
There are so many kids walking up and down Fairfax with ridiculous facial tattoos that I didnâ€™t think too much about it before I did it.
In my opinion this whole worldâ€™s going to shit, and shit rolls downhill, so I might as well just jump in, hold my breath, and pray to G-d that thereâ€™s a nice big soft puddle of diarrhea for me to land in once everything hits the fan.

On what was going through her mind
She was on a pretty good one when she came in, and I think by the time I finished, she was coming down, because her attitude changed pretty drastically once the tattoo was finished.